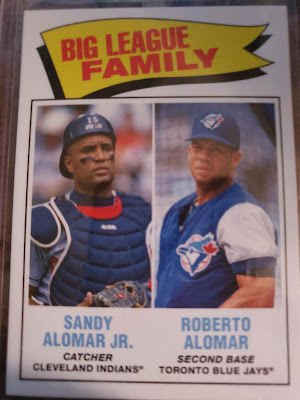 For the second time, Sandy Alomar Jr. appeared in one of the Topps online-only Throwback Thursday sets.  The first time was during the 2016 World Series when he appeared along with Mike Napoli on a card celebrating past and present of the teams in the Series.  This time, he appears alongside his Hall of Famer brother Roberto, once again.  This set celebrated family members who played in the Majors.  The only surprise is that it did not include their father Sandy Sr.
Posted by Metallattorney at 8:11 PM