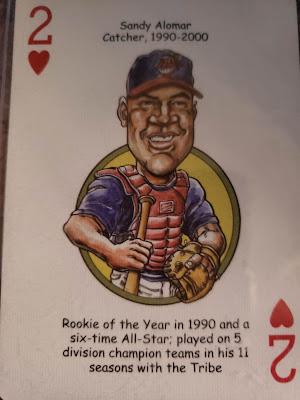 I am not really sure why I never came across this card before.  I was aware these sets, a playing card set with players from each team on them.  I have one of the sets for the Red Sox and there were updates over the years with some more recent players added.  Alomar is of course one of the top catchers in Cleveland team history, so it only makes sense he would appear in a set commemorating the best players in team history.  As the card says, he was a Rookie of the Year and six-time All Star.  He also won a Gold Glove and an All Star Game MVP.  He likely could have been the World Series MVP in 1997 had the Indians held on.

Posted by Metallattorney at 9:31 PM