Mail Call! With a Package from The Junior Junkie

My first package with another blogger came in yesterday from The Junior Junkie.  He sent me a random assortment of Sandy Alomar Jrs.  Most of them were cards I had previously but one stood out, the 1994 Stadium Club base card.  I had the Golden Rainbow parallel, but not the base, oddly enough. 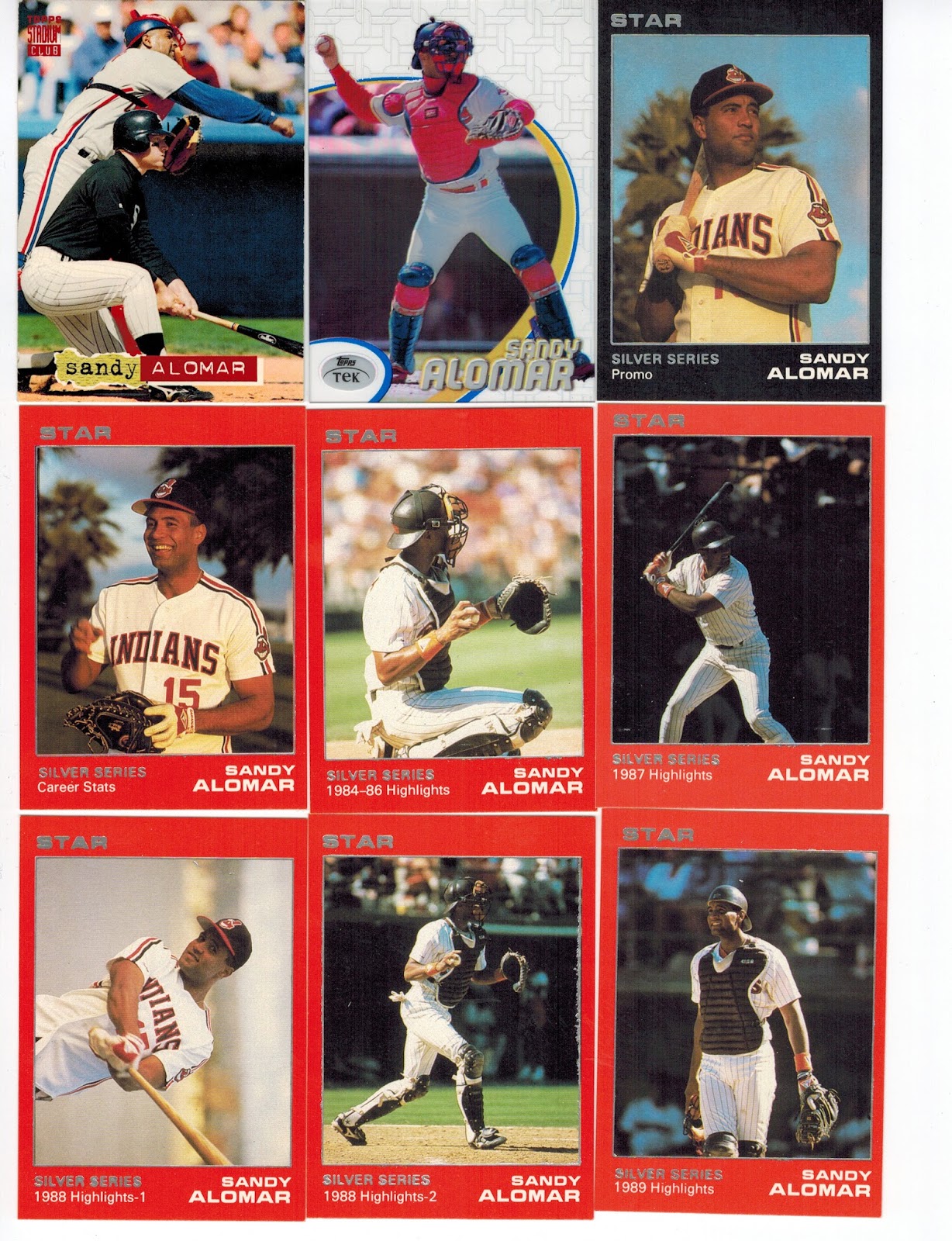 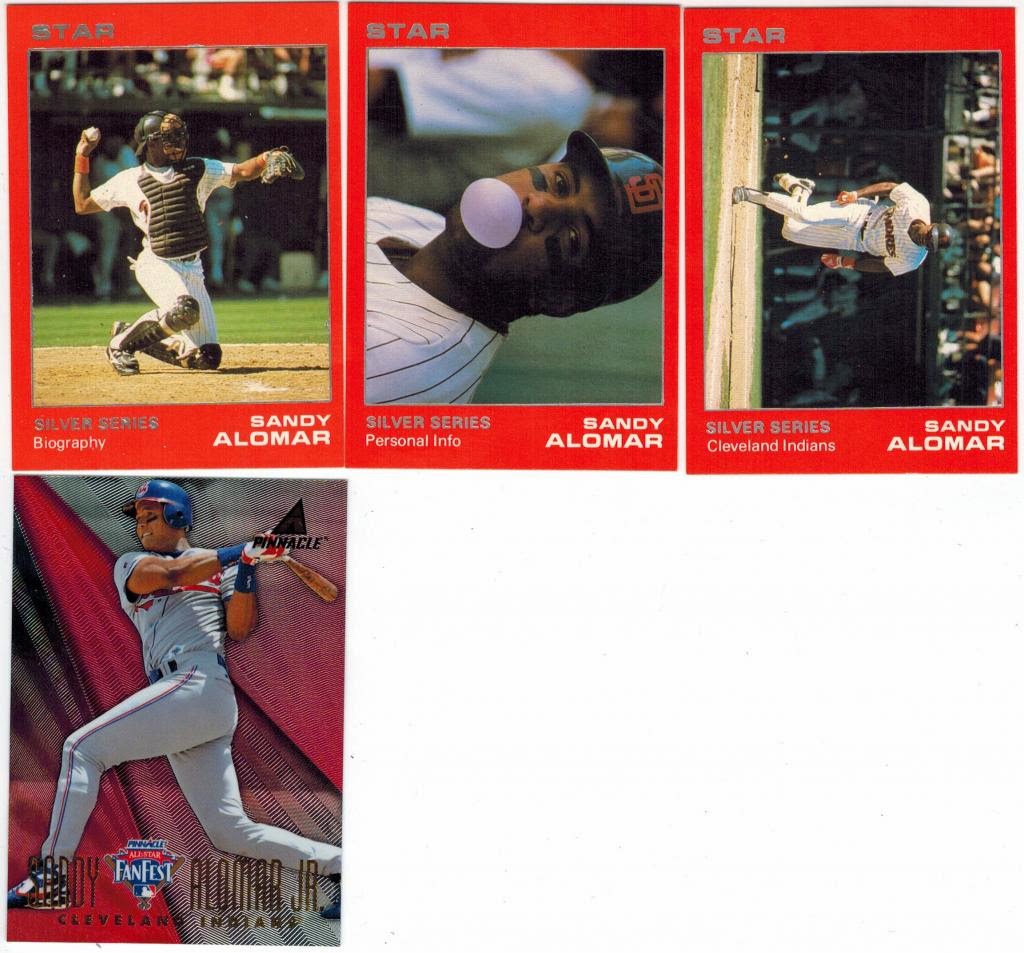 As you can see, quite a few other cards to show off today.  The Topps Tek is my first of Alomar.  I would love to build the entire series of his cards, in fact that may be one of my big goals to get started.  It may be difficult though because the set is now 15 years old.   Not too many people breaking it.

You can see ten cards from the Star company.  These are kind of interesting cards that come in packages of about ten or so devoted to one player.  I have a number of these in my Red Sox collection, this is my second Alomar set.  The black one is apparently some kind of promo.

The final card is a 1997 Pinnacle Fanfest SP.  This is from the All Star game in which Alomar homered to win the MVP.  Pretty cool.  I had never seen one before.  I may have overpaid for it, but not a problem.  Gotta be willing to do that with a single player collection, at least occasionally.
Posted by Metallattorney at 1:03 PM No comments:

This will be a major feature in the coming days and weeks as I went on a binge when I started this collection up again.  So here are the new ones from this morning: 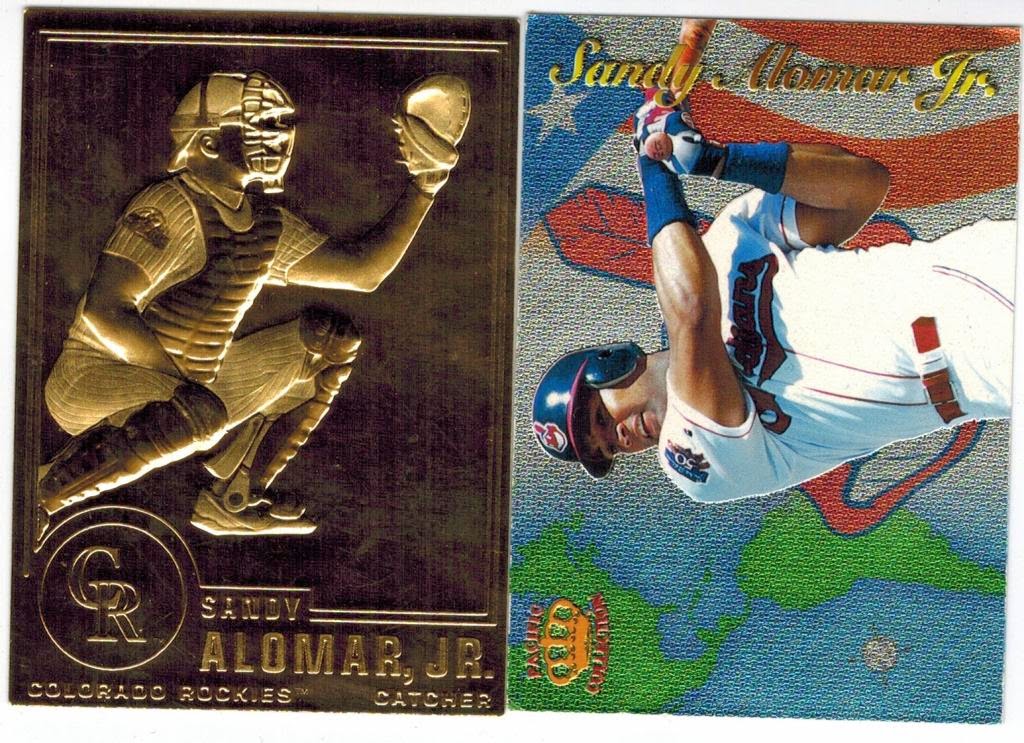 1.  2003 Danbury Mint.  I have a bunch of these 22 kt. gold cards in my Red Sox collection including the entire 2004 and 2007 World Series Champion sets.  This is my first non-Red Sox card though.  I really like this because it is unique and it features Alomar with the Rockies, making it one of three unique Rockies cards of Alomar that I am aware of, other than all of the parallels of the 2002 Topps Traded issue.

2.  1998 Pacific Crown Collection Latinos of the Major Leagues.  Pacific focused on Latin stars during its run.  That was what made it an interesting brand.  The company had insert sets spotlighting Latin stars which is where this card came from.
Posted by Metallattorney at 7:11 PM No comments:

One card to show off today, but it's a decent one: 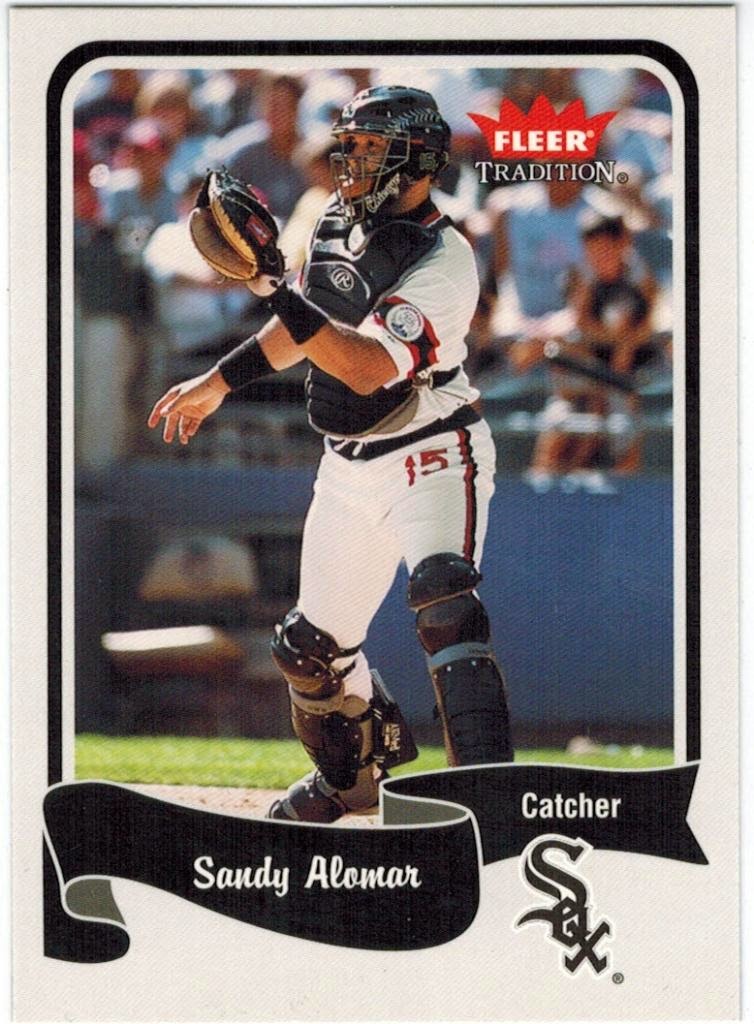 2004 Fleer Tradition SP.  This is a short-printed card with a nice shot of Alomar waiting for a throw from the cutoff man, it would appear.  Full catcher's gear with the nice hockey-style mask which contrasts quite sharply with the obvious throwback White Sox uniform with the number on the thigh.  Interesting combination there.
Posted by Metallattorney at 4:30 PM No comments: 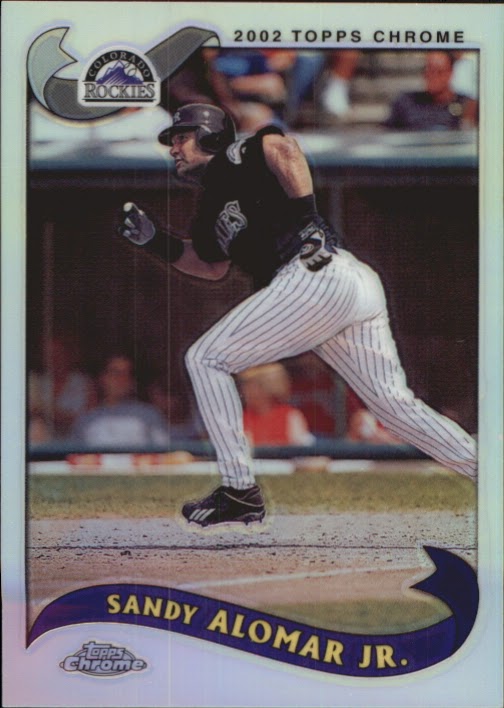 My favorite thing about my single player collection is getting a variety of teams involved.  Sandy Alomar Jr. played for a number of teams over the course of his career.  He is of course most well-known for his time with the Cleveland Indians.  And for good reason.  He won the 1990 AL Rookie of the Year, a Gold Glove, was a six-time All Star, including the All Star MVP in 1997, and played in two World Series.  All of that occurred with the Indians.

His time with other teams was not nearly as impressive.  Nevertheless, I really enjoy picking up cards of him with his lesser teams.  Unfortunately there just are not nearly enough of them.  He has plenty of cards with the San Diego Padres and a fair number with the Chicago White Sox, but there are very very few cards with the Colorado Rockies, Texas Rangers, and Los Angeles Dodgers, and none with the New York Mets.  That is my biggest disappointment.  He does have a minor league issue with the Mets organization, but that is as close as I will ever come.  Granted he played in just eight games with the Mets, but that is all he played with the Padres as well.

Alomar's best cards will always be his Indians issues, but it's nice to add a little more color once in awhile to the collection.
Posted by Metallattorney at 11:58 PM No comments:

The One Time I Saw Alomar Play

I have not been to a lot of baseball games over the years.  I live in Nebraska, Kansas City has been the closest team and even that was a four or five hour drive.  Just not something I did a lot.  Most of the games over the years that I have seen have been Red Sox games, for obvious reasons, but I did see the Royals play the Indians once.

My first baseball game I think was in July of 1992.  I think I have tracked down the date to July 17, a Friday night, based entirely on my memory of Sandy Alomar Jr.'s performance.  In that game, he doubled and was stranded at second base.  He did catch two runners attempting to steal with one other player successful.  He caught Wally Joyner and Brian McRae while Curt Wilkerson was successful.

That was the one time I saw Sandy Alomar Jr. play.  It was one of the rare games that season that he was healthy.  Yes I was collecting him at the time.  I remember after the game I sent a letter to him with a couple of cards to autograph.  I never did get them back.  That was the only time I ever attempted to get a TTM autograph.  It did kind of sour me on the whole thing, but it did not effect my view on Sandy.
Posted by Metallattorney at 6:05 PM No comments:

To be honest, I don't really know.  I was 10 years old when I first started collecting baseball cards.  I became a Red Sox fan with my first pack of baseball cards.  But it took awhile longer before I started my player collection.

My first card of Sandy Alomar Jr. was a 1991 Donruss Series 2 card (I will get to that soon).  That was at least a couple of months after I first started collecting.  I also do not know the circumstances surrounding that first card.  I think I probably got it in a pack, though I don't know when.

At some point I decided to collect a few players.  My rules were simple.  I did not collect Red Sox players because I did not want to separate my Red Sox cards.  Those cards had to stay together.  I have never denied being a little obsessive-compulsive.  I also rarely collected Yankees players.

Anyway, there were a few players early on that I started focusing on, just to have something new to collect.  Part of it was that I wanted to trade with my two brothers and they rarely had Red Sox I needed.  So I needed something else to try to trade for.  The earliest players I remember collecting were Sandy Alomar Jr., Delino DeShields, Tom Glavine, Ryne Sandberg, Barry Larkin, and Craig Biggio.  I remember considering picking just one player and DeShields was one of the players I was strongly considering with Alomar being the other option.  I believe I ultimately picked Alomar because I always liked catchers.

So at some point I decided to focus a single player collection on Sandy Alomar Jr.  I still collected a few other players, but Alomar was unique.  I actually had the collection in a binder.  Only my Red Sox were previously treated this way.  My Alomar collection was also unique because I allowed myself to buy cards of him directly.  Again, I only previously spent money on single card of the Red Sox.  I had a friend who had a single player collection of Jose Canseco and he and I went to card shops together.  At this time, Alomar was something like a primary focus.

At some point around 1993, the Alomar collection lost its luster.  Much of that had to do with the near-constant injuries he faced each year.  Part of it was also that I slowed down my collection in general.  After that I picked up a few cards here and there, but for the most part this was a time when the player collection took a backseat, almost permanently.

For some reason I never really got a lot of cards of Alomar in packs.  So the collection rarely increased until recently.  For the last year I have added a number of cards here and there in trade.  Which brings us to this week.  I decided to resurrect the Sandy Alomar Jr. player collection.
Posted by Metallattorney at 10:34 PM 3 comments: